This Flower Will Fade and Die 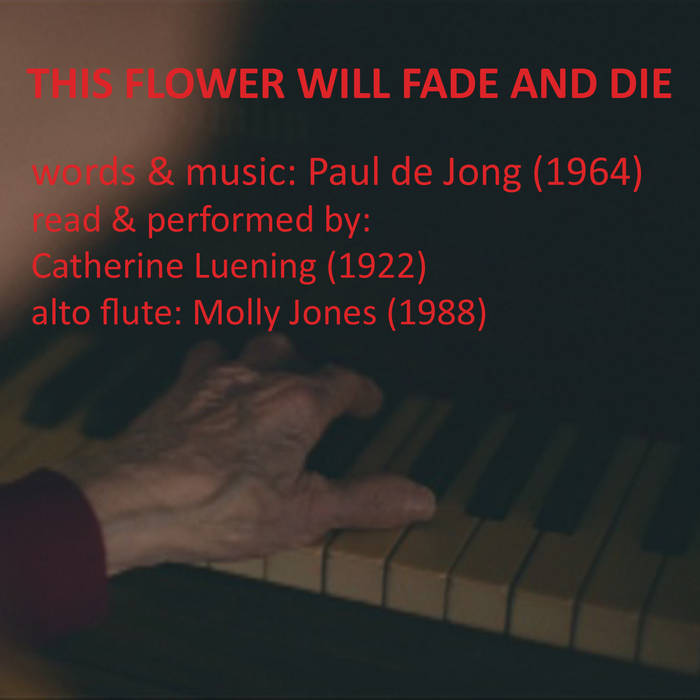 For a while... Favorite track: This Flower Will Fade and Die.

Paul de Jong created This Flower Will Fade and Die for his most unusual collaborator and friend, 97-year old musician and educator, Catherine Luening. Catherine is the widow of flutist and electronic music pioneer, Otto Luening. De Jong had the invaluable opportunity to serve as Luening’s final assistant in New York City during the mid 1990s.

This Flower Will Fade and Die is the first of ten episodes of a ‘music and lyrics’ driven film, Love Me Alone. Each episode portrays an individual representing a specific decade of life. Love Me Alone springs from de Jong’s ongoing investigation of specific dependencies as a phenomenon defining human relationships: prolongation of the species and personal survival, emotion and economy, love and money, and finally, broken down into loneliness and debt.

After having recorded Luening’s reading of his poem, de Jong set the result to the musical accompaniment of a harmonized and delayed found piano sample, a pitched metal bowl, and Molly Jones’ soulful alto flute performance – recorded when she serendipitously stopped by his studio during a long musical road trip. Echoing Otto Luening’s early tape experiments, Jones’ flute recordings were slowed and pitched down, delayed and overlayed in an elementary two-track analog manner, although in this case the effects were applied digitally. Towards the very end, one may vaguely discern Otto Luening’s voice: “Butterfly… farfaletta… papillon… Schmetterling…”

Several months after the initial voice recording, de Jong set up an intimate film shoot at Catherine Luening’s Manhattan apartment, where she was captured on camera by Lucas Miller while listening for the very first time to the results of her own voice set to music.

Dutch-American cellist-composer Paul de Jong is probably best known as co-founder of collage-pop eccentrics, the Books. After the band’s breakup in 2011, de Jong embarked on a wild creative trip which to date has produced two solo albums and a single on Temporary Residence, live shows, videos, prints, collaborations, and the unlocking of his vast archive of fringe media aka the ‘Mall of Found’. ... more

Bandcamp Daily  your guide to the world of Bandcamp